In a rare complication, some patients infected with Covid-19 have been found suffering from Guillain Barre Syndrome (GBS). In India, such cases have been reported since August.A group of neurologists in Mumbai is now mapping these cases and their symptoms. So far, 24 cases have been added to the study.

What is Guillain Barre Syndrome? 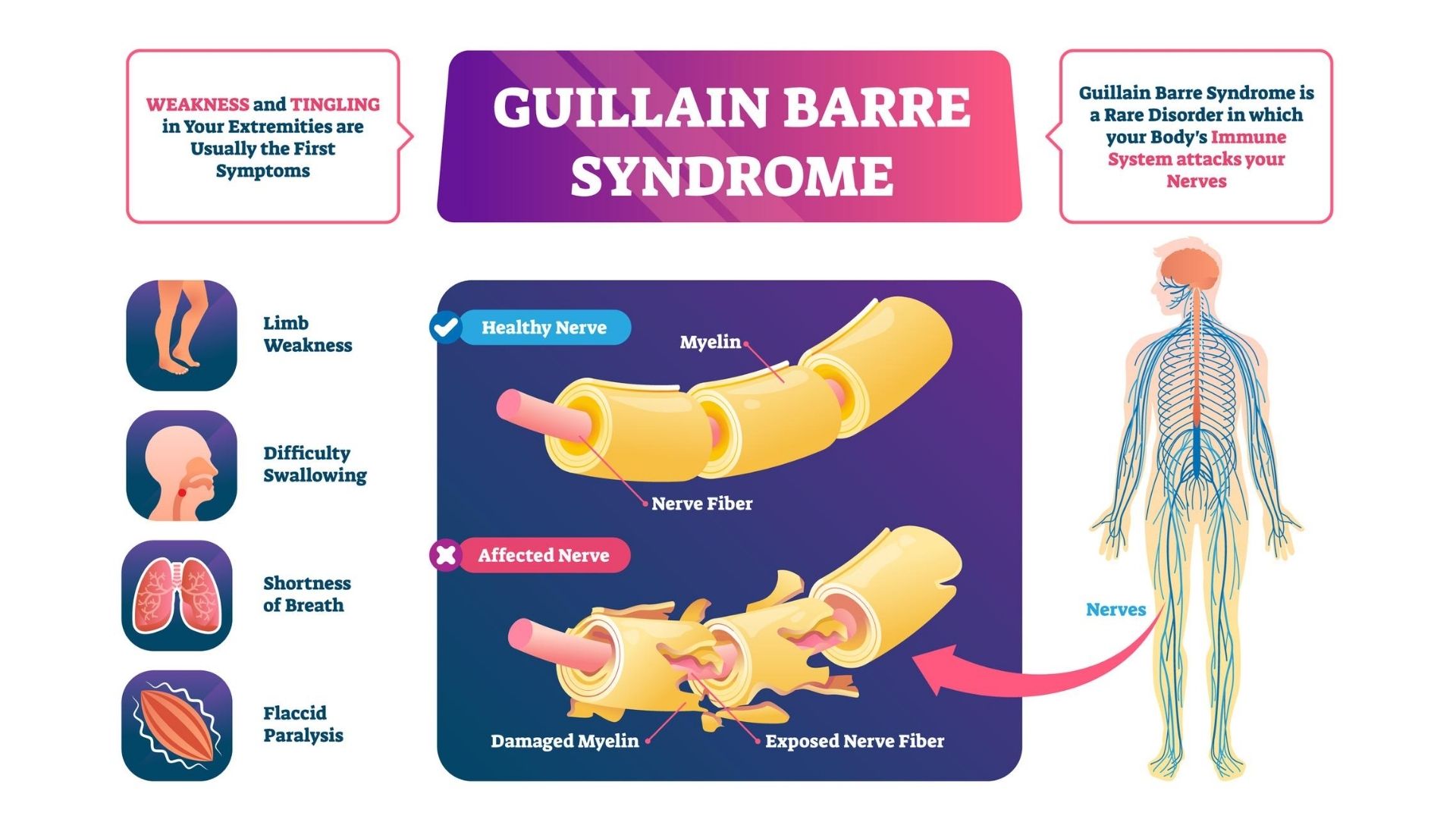 The syndrome’s first symptoms are a tingling or itching sensation in the skin, followed by muscle weakness, pain and numbness. The symptoms may emerge first in feet and hands. A person then starts experiencing reflex loss and paralysis, which may be temporary, but can last for 6-12 months or longer. With Covid-19 a year old, it is still difficult to assess the nature of permanency GBS in such cases may present.GBS is caused by bacteria or viral infection. In the past, patients of Middle East Respiratory Syndrome showed GBS symptoms, as did those infected with Zika, HIV, Herpes virus and Campylobacter jejuni.Covid-19 is known to affect digestive, cardiac and kidney functions. It is also known that some –– not all –– patients are prone to neurological problems if they contract the virus. The virus can cause memory fog, anxiety, headache and depression if it attacks parts of the brain which form the central nervous system.

In all these cases, the virus attacks the organs or tissues directly leading to the complication. But in some cases, it can have an indirect effect. It can trigger an immune response so powerful that the body’s peripheral nervous system can come under attack. “It is paradoxical. We all want a good immune system. But if the immune system is over-active, it can be detrimental for the body. It can attack healthy nerves along with attacking the virus,” Dr Pankaj Agrawal, heading the movement disorders clinic in Global hospital, Mumbai’s Parel, said.In June, The New England Journal of Medicine published an article giving case details of five patients in three hospitals of Italy, who suffered from this syndrome after getting infected by Sars-CoV-2 virus. Initial symptoms were weakness in lower limbs and a pricking sensation in the skin.An interval of 5-10 days is noticed between onset of GBS symptoms and Covid-19 infection, but some doctors say it can also take weeks after Covid-19 infection for a person to develop GBS.The British Medical Journal published a similar case from Japan last month, where a 54-year-old woman developed numbness and weakness and required two week hospitalisation. Tests showed she had pneumonia in chest, and her Covid-19 report came positive.Various studies have some consensus: the GBS symptoms emerge a few days after Covid-19 infection. Several patients who have recovered or are about to recover have developed its symptoms, and most have recovered.

A multi-doctor study and registry in Mumbai is underway and slated to be finished in three weeks. Led by principle investigator Dr Megha Dhamne, neurologist in Dr LH Hiranandani hospital, Powai, the study is collecting case studies of Covid-19 patients with GBS and mapping their symptoms. Several neurologists in Mumbai are part of it. “GBS can leave behind permanent neurological damage. Most will completely recover but some may have paralysis in limb and weakness in body for a longer period,” Agrawal says.

Agrawal adds he has seen the syndrome in not just adults but also children. Most had recovered from Covid-19, gone home and returned weeks later with GBS.

Studies have indicated that patients need a few weeks of hospitalisation. Dr Kedar Toraskar, chief of critical care in Wockhardt hospital, Mumbai Central, said if a patient is not treated, his condition may deteriorate. “There could be respiratory failure as the worst outcome, or weakness and effect on walking and limb movement. Patients cannot be treated at home, they need hospitalisation and immunoglobulin or plasma,” Toraskar said.

Actor Madhavan To Play Lead Role In Ratan Tata's B...

India VS Australia- David Warner Ruled Out For ODI...

Major Dam On Brahmaputra River To Be Build By Chin...
Trending News

Actor Madhavan To Play Lead Role In Ratan Tata's B...

India VS Australia- David Warner Ruled Out For ODI...